×
×
SNOW CONDITIONS »
WEATHER »
RUNS »
LIFT STATUS »
WEATHER FORECAST »
×
MOUNTAIN CAMS »
STAIRWAY
TERMINATOR
EAGLES EYE
SNOW PLOT
BASE
CATAMOUNT
×
CM
in the last 24 hours
Chelsea Czibere is an adventure lifestyle photographer from a rural community in Alberta close to the Canadian Rockies. An avid skier, snowboarder, downhill mountain biker, rock climber and runner, Chelsea loves to be outside and in the mountains enjoying adventures big and small. She’s happiest outside with her husband, three kiddos, and golden retriever that looks like a lab (of no fault of her own). You can find her telling stories through photography and writing at www.chelseamackenziephoto.com or on Instagram @chelseamackenzie.1 where she works to inspire others to get outside and have their own adventures. 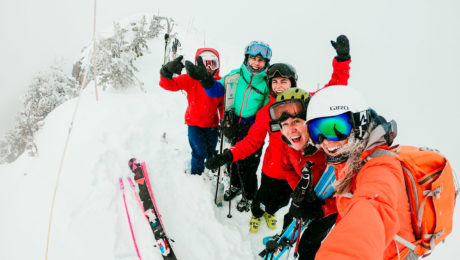 “Nope, just kidding, I’m not ready yet,” I slowly exhaled sizing up the drop

“Are you sure I can do this? It looks so much bigger from up here!” and so went two days of chatter directed toward our ever-patient instructor at the Rippin’ Betties Freeride Camp.

I had never taken a lesson before, so I was very keen to jump into the women-only two-day program aimed at level 5 and 6 skiers. I didn’t know what level of skier I was, but because I was game to ski anywhere on the mountain, I figured I’d be alright in spite of my flailing arms. It was humbling, exciting, and left me obsessing over off-piste terrain. Skiing has always been a fun pastime for me, but I’ve never felt like such a student of the sport. Ever since pulling off my boots Sunday evening, I have been on YouTube, surfing the web and flipping through the pages of Ski Canada to ensure I drop my backseat ski habit. There also couldn’t have been a better setting than Kicking Horse to improve big mountain skiing. Everything about that mountain is big – and in turn, my fun little pastime turned into big fun.

All age groups were well represented in the camp, but it was especially inspiring watching women with a couple of decades of experience on me fly down aggressive chutes with textbook turns. Everyone had their own reasons for joining the camp, some wanted to gain a better understanding of the giant mountain and learn where the cliff bands lie on the black and double black terrain. Others wanted to finally unlock those hips and gain a more even weight transition as they sailed between tightly spaced trees. A few just wanted to be pushed to take on steeper and deeper terrain than they were normally willing to tackle or take on drops with confidence. Regardless of our reasons for joining, we all left having become apart of a sisterhood of shred.

“It’s like you’re constantly being egged on, but in such a supportive way,” noted Kate, a University of Calgary graduate student who was enjoying all the little drops and powder stashes during the camp before attending the pro patroller camp the following week.

We spent time chatting, and sometimes gasping, as we hiked for untouched powder.

The views, camaraderie, and snow were worth every minute. Instructor, former National Spanish Team Skier, Elana Acuña spent the last several years skipping summer altogether. Instead, she catches a plane each spring (of which she experiences twice yearly, one in lieu of fall) to the other hemisphere to coach and skis the winter away. Our group would giggle behind her as she would assure us that the double black diamond we were about to drop into on a Northern Ridge was in fact, “easy.” Laugh as we might at her laid back attitude regarding what we viewed as very intense skiing, we still knew she wouldn’t take us anywhere we wouldn’t be safe. She somehow both assured us of our fears and lit a fire of passion under us. As a result, I had some of the most fun skiing days of my life. She was knowledgeable, easy-going, kind and funny – not to mention an absolute monster on skis!

I was definitely one of the weaker skiers, but still game to tackle all the camp had to offer. As are most things in life, skiing isn’t as much about what you are capable of doing, but what you think you are capable of doing. There were a few women uncomfortable in some of the really challenging terrain and experienced nervousness they struggled to work past.  Quickly the instructors assigned to our camp asked for a third coach to join us and we split into three groups ensuring everyone a positive and fun learning environment.

In short, if you’ve been thinking about trying a camp like this stop thinking about it and sign up. I might just be sitting in the gondola next to you – I’ve been scheming on my next camp since that first run on the first day. 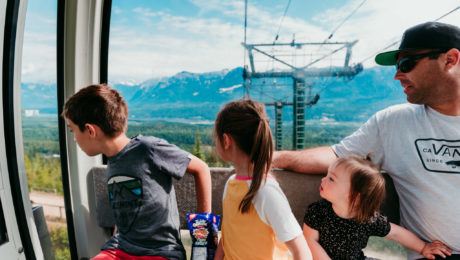 “You’re taking your kids to Kicking Horse to bike? That’s an aggressive hill…”

Those words rang in my ears as we headed west to Golden for a family trip to Kicking Horse Mountain Resort. The kids, ages 1, 5, and 7 were buzzing with excitement. The parents were buzzing too – but with nerves. Our little boy had ridden lift-access trails only a couple of times, the girls were both too young to bike, and we hadn’t looked into whether or not our golden retriever was welcome. Great planning – I know.

When we pulled up to our campsite right on the hill, our breath was taken away. We couldn’t help but give in to the kid’s excitement with the sweeping mountain views. Within minutes, the kids discovered a park, beach volleyball court, frisbee golf and a pump track that got them grinning. The members of staff were all so friendly, giving directions and tips and even patting our vagabond pup. Things couldn’t have been better and we hadn’t yet gotten on a lift.

The five of us hopped on the high-speed quad chair to go see Boo the grizzly bear who’s lived at the sanctuary since his mom was poached as a cub. Between his enormous presence and the guide’s funny and informative lecture, we were enraptured. (The Steve Erwin-type experience was only enhanced with his Australian accent – the guide’s, not Boo’s.) The kids could hardly believe that we came so close to this huge grizzly, and I could hardly believe we were spending all this time together as a family even though only a couple of us were riding at a time. After the tour, our son chased us down the mountain on our bikes where we all met again to head up the gondola.

The views from the top were staggering, and we drank it in from the Eagle’s Eye restaurant. We enjoyed watching climbers on a via ferrata adventure before heading back out where the younger two scrambled at the top with their dad and our seven year old and I tore down the mountain. The green and blue runs were perfect for him the entire way down.  Often, green runs at lift-access locations means cross country-like up and downs that would never be found at the top of the mountain and they can be a bit boring for downhill riders. Not so at Kicking Horse. Green runs meant appropriately steep single track with equal care put into the building and design as black diamond trails. Rolling wood features, little jumps and fun sweeping berms were characteristic of the easier runs. My husband and I loved taking turns biking with our oldest, while the other enjoyed endless activities with the younger two which often included all of us taking lift and gondola rides together and spending time exploring between biking. It was really hard narrowing down the best parts of our trip – so we asked the kids. The “pro list” got ridiculously lengthy, so I tried asking what they would change.

“Next time, let’s stay for fourteen days instead of four!” That summed it up perfectly.