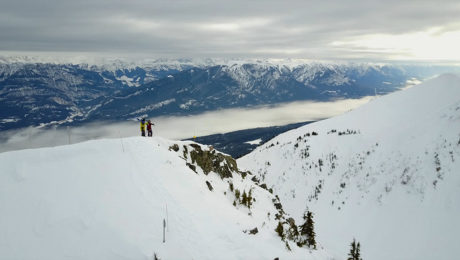 Don’t stare at the Kicking Horse trail map for too long. The diamond glare might hurt your eyes as in 39 black diamonds to go with 60, yes 6-0, double-black runs. It’s no surprise the very same topography that defines this mountain provides what most consider the best backcountry fodder in the world. There’s really no other way to put it, the Horse’s badassedness resides in a corral all its own.

Like everyone I know who’s skied here I still vividly remember my first time. I was heading to the backcountry out of Golden for a few days so I figured I’d warm-up at Kicking Horse, ease my legs into my boots before tackling the challenging stuff deep in the Purcell Range. I hadn’t bothered to look at the trail map, figuring one interior B.C. ski area was pretty much like any other Powder Highway stop. After my first 4,000-plus foot vertical descent I suddenly felt like that kid who hadn’t bothered to study for a test only to enter class and discover it was the final exam. (Come to think of it I was that kid!)

My saving grace on the mountain was the justification that cutting down blue Sluiceway and Cloud Nine all day would preserve my lactic acid for what was to come. In other words, I had a ready to excuse take it easy. “Let’s stick to the bowls and gullies,” I suggested to my partner, an outstanding skier who doubles as a Seattle architect. “There’s no reason to pop onto the ridgelines given where we’re heading.”

I didn’t harbor the same excuse the next time I pulled into Golden and, truth be told (again!), my previous backcountry foray had paled in comparison to the “warm up” terrain anyway. On that day I’d peeked at all the chutes just below Eagle’s Eye Restaurant off CPR Ridge with a ready excuse to avoid them. Not so this trip. It was time to see what all the hype was about, the chatter about the regular Freeski IFSA Nationals held here and the 100+ diamond runs that glitter like the studs in David Beckham’s ears.

It may sound strange but CPR Ridge reminds me a little of the coral reef in Indonesia. Though individually named, the chutes are so abundant they’re just listed as 49-64 on the trail map. What recalls diving in Komodo National Park is their diversity, not simply this ladder or that gap.  One could spend the day floating around down “Spurline,” “Iron Horse” or, my favorite, “Craigellachie” and never get bored.

The mundane does not actually exist anywhere at Kicking Horse, one of those rare resorts where you can ski every terrain type on a single run, an unanticipated virtue, at least by me, of skiing a hill top-to-bottom on a regular basis. I’d sum it up this way, to steal a cliché and turn a few stomachs: Kicking Horse is a little bit backcountry and a little bit rock and roll.